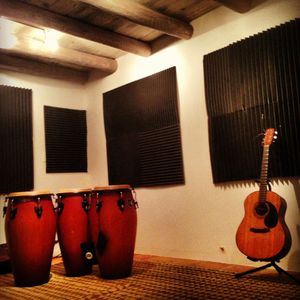 Fw Studios is a recording studio located in Santa Fe, NM. The studio features 2 acoustically treated recording rooms, 1 isolation booth and a control room with the ability to record 16 simultaneous tracks of high quality audio. The studio is founded by award winning producer, songwriter, arranger and drummer Dennis Javier Jasso. Dennis won the 2016 "Norman Petty Producer of the Year" award from the NM Music Awards and is a voting member of The Recording Academy (GRAMMY Awards) and The Latin Recording Academy (Latin GRAMMY Awards). Dennis brings years of experience to the studio as an audio engineer and musician. He is a certified Pro Tools User and has earned a "Professional Certificate" in Audio Production from Berklee College of Music's highly acclaimed online program. Dennis has intensely studied the art of audio production and has gained experience mixing and mastering Rock, Pop, Metal, Americana, Singer-Songwriter, Latin, World, Reggae, Jazz and Electronic music. Fw Studios is a budget friendly recording studio. The studio has produced several NM Music Award winning songs, firmly establishing itself as a competitive, high quality, audio production studio. 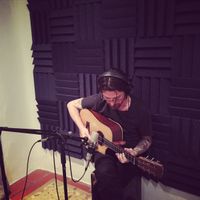 All projects begin with recording. Fw Studios is equipped to record 16 simultaneous tracks of high quality audio with 7 individual stereo headphone mixes. The studio has a wide variety of microphones that are standard to recording studios world wide. Fw Studios uses an Apogee Rosetta for AD/DA conversion. The Rosetta is widely considered one of the best analog to digital, digital to analog converters available. The studio also features class A preamps to ensure high quality audio is being captured via Pro Tools. We have 2 recording rooms and 1 isolation booth. 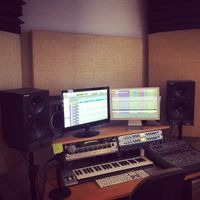 Some projects require little to no editing while others could benefit from large amounts of editing. Some common editing tasks include getting rid of silence, applying fades at various points and treating punches or stops and starts that were done in the recording process. Some more involved editing may include tuning and tightening up a performance by using our eyes and ears and some powerful tools in Pro Tools. 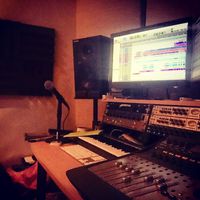 The mixing process is complex but some of its basic elements include, setting the volumes of each track, placing tracks in the stereo field, applying equalizers and compressors and using reverbs and delays to create space and ambience in the mix. It can also include applying effects by aggressively using all the tools just mentioned and then some. The skies the limit. The possibilities really are endless. For mixing, Fw Studios uses stock Pro Tools plugins plus third party plugins from Waves, Sound Toys, Izotope and many others. We believe a "good mix" means producing something the artist and their production team are happy with. 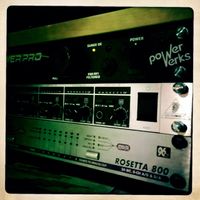 Mastering is the last step in the creative process and the first step in the manufacturing process. The end result is a "master" file or disc that is used for duplication. Mastering brings all the songs in one place and helps them live together. This is done by bringing them up to an equal volume and treating them so that they share a similar tone shape and at times, a similar stereo image. It is also in mastering that information is encoded into the master disc. Information such as the artist name, song titles, performers and ISRC codes. It is widely thought that a project should be sent to a mastering house to be mastered by a mastering engineer. We would agree with that. However, sometimes budget and time do not allow for that. Fw Studios can master should anyone need it.